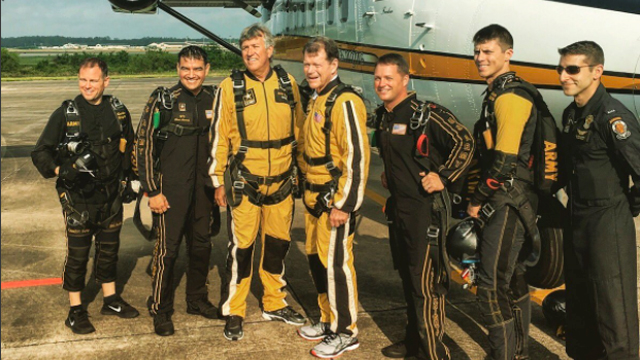 About two weeks ago, golfing legend Tom Watson took to the air and at age 67 experienced his first parachute jump.

“It was a blast,” Watson said. “It’s something you ought to do.”

Watson was looking at baseball Hall of Famer George Brett when he said that. The Kansas City sports icons came together Monday to support the Joe McGuff ALS Golf Tournament at Nicklaus Golf Club at LionsGate.

Watson said he always wanted to jump from a plane and mentioned it to friends in the Wounded Warriors Project, who connected Watson with the 82nd Airborne, a U.S. Army infantry division based at Fort Bragg, N.C., that specializes in parachute assault operations.

In late April, the jump was arranged with the U.S. Army Parachute Team, known as the Golden Knights.

Watson and the Golden Knights climbed 14,000 feet, and it was go time.

“You’re tethered to a guy who knows what he’s doing,” Watson said.

Out they went, closely followed by another jumper with a GoPro camera to capture the action on video.

Watson was told he reached 120 mph after about 50 seconds before the parachute opened. He touched down about seven minutes after the chute opened.

The winner of eight major championships, many in dramatic fashion, Watson must have felt like he was walking on air. Now he knows the sensation literally.

#TOMSTIPS: HOW TO CHIP UPHILL

#TOMSTIPS: HOW TO SEE THE LINE